Paul Rudnick is a novelist, playwright, essayist and screenwriter, whom the New York Times has called, “one of our pre-eminent humorists.” His plays have been produced both on and off Broadway and around the world, and include I HATE HAMLET, JEFFREY, THE MOST FABULOUS STORY EVER TOLD, VALHALLA, REGRETS ONLY, and THE NEW CENTURY. He has won an Obie Award, two Outer Critics Circle Awards and the John Gassner Playwrighting Award, and two of his short plays have been included in STANDING ON CEREMONY: THE GAY MARRIAGE PLAYS. His novels include SOCIAL DISEASE and I’LL TAKE IT, both from Knopf and PLAYING THE PALACE from Berkley. He’s a regular contributor to The New Yorker and his articles and essays have also appeared in The New York Times, Esquire, Vogue and Vanity Fair. HarperCollins has published both Mr. Rudnick’s Collected Plays and a group of essays entitled I SHUDDER. His essays have also been included in the New Yorker anthologies FIERCE PAJAMAS and DISQUIET, PLEASE.Mr. Rudnick is rumored to be quite close to Premiere magazine’s film critic Libby Gelman-Waxner, whose collected columns were published by St. Martins under the title IF YOU ASK ME. Ms. Gelman-Waxner has also reviewed in the pages of Entertainment Weekly, and the column now appears every few weeks on The New Yorker website.Mr. Rudnick’s screenplays include IN & OUT, SISTER ACT, the screen adaptation of JEFFREY, and ADDAMS FAMILY VALUES. His Young Adult novels, entitled GORGEOUS and IT’S ALL YOUR FAULT, have been published by Scholastic.Mr. Rudnick has appeared on the Today show, Real Time with Bill Maher, Conan O’Brien, A Prairie Home Companion, and Fresh Air, among other programs. Mr. Rudnick’s new play, Guilty Pleasure, will be directed by Christopher Ashley and produced at the LaJolla Playhouse. On September 12, 2020, HBO began airing Coastal Elites, written by Mr. Rudnick, directed by Jay Roach, and starring Bette Midler, Dan Levy, Issa Rae, Sarah Paulson and Kaitlyn Dever. He’s currently writing a screenplay called EX-HUSBANDS, based on an original idea by Billy Eichner, for Amazon. His new novel, FARRELL COVINGTON AND THE LIMITS OF STYLE, will be publshed in June of 2023 by Simon&Schuster. 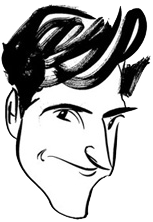 Novelist, playwright, essayist and screenwriter, whom the New York Times has called, “one of our pre-eminent humorists.”
Illustration by Tom Bachtell