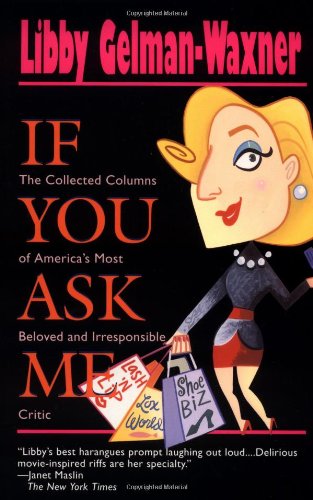 Hi. I’m Libby Gelman-Waxner, and I’m an assistant buyer in juniors’ activewear. While I find my work both rewarding and creative, especially with the new knits coming in, I want more. And so I decided to become a film critic….

Move over, Siskel & Ebert. Watch out, Leonard Maltin. And just forget saving that aisle seat, Mr. Medved. Libby Gelman-Waxner has arrived — in the critic’s circle, that is — and the silver screen may never be the same again. Witty, wicked, and scathingly honest — If You Ask Me is a hilarious collection of her columns from Premiere magazine.

BOOKS OF THE TIMES; So, Libby, Should I See the Movie?

Readers of Premiere magazine know the monthly columnist Libby Gelman-Waxner as a tireless practitioner of what one of her fans calls “glandular criticism.” Her marriage to Josh Waxner, “a wildly sought-after Upper East Side orthodontist,” and her job as “an extremely successful assistant buyer in juniors’ activewear” are no obstacles to Libby’s career as a guerrilla movie fan, happily throwing brickbats and valentines at the screen.

Delirious movie-inspired riffs are her specialty, the more personal the better. She leaves a screening of “Indecent Proposal” and describes running into a dead ringer for Demi Moore, who buys a night with Josh Waxner in exchange for $170 and aisle seats for “Sunset Boulevard.” Libby regales readers with her relatives’ thoughts about movies. (“Jennifer begged me to take her to ‘The Karate Kid III,’ but I explained that if I did, the Government could legally place her with foster parents.”) Writing from her bathtub, “with the whirlpool attachment turned to the adultery setting,” Libby contemplates “The Last of the Mohicans.”

She announces that she would not mind being Libby Gelman-Day-Lewis some day.
What readers may not know about Libby is that she is actually the pseudonymous creation of Paul Rudnick, the fabulously funny playwright (“Jeffrey”), screenwriter (“Addams Family Values”) and novelist (“I’ll Take It”). And Mr. Rudnick weaves many a trenchant thought into Libby’s comic screeds. The mark of movie-making experience is apparent here, no matter how giddy, ad hominem or trivia-crazy the tone. For instance:

Libby on directing: “If I bake a cake, I buy the mix, I put it in the microwave, and I take it out when it beeps; my husband watches me do all this, which makes him the cake’s director. The director is like God; no one knows if God really exists, but it’s someone to blame. Some directors even went to film school, mostly to watch old movies; film school is a three-year version of a snow day.”

Libby on screenwriting: “Screenwriters often work in pairs, because one partner usually specializes in writing the phaser battles, while the other partner is good at lines like ‘Hasta la vista, baby,’ or ‘Lieutenant, what the hell is going on out there?’ “
Libby on stars: “Lassie couldn’t talk, act or be in any way human and yet she became very popular by simulating these talents; Lassie is the role model for today’s biggest box-office idols.”

Libby on marketing: “Marketing is, of course, 99 percent of film making, because it is the only part of the process that the execs, the writers, the stars, the director and the audience really enjoy. In the TV ads, the movie is always the feel-good hit of the summer, the star looks great and the audience gets to see the only 30 seconds of the movie that actually work.”

Not all of “If You Ask Me,” a slender collection of Libby’s Premiere columns, is quite this sure-fire. Libby can ramble, repeat herself and overuse the semicolon; you will know way too much about her shopping habits before finishing this book. But you will also have annoyed anyone within earshot, because Libby’s best harangues prompt laughing out loud. Libby elaborating on “Heathers” to her daughter: “I explained to Jennifer that just because someone is blond and cute and popular, that’s no reason to murder them. The best thing to do is wait 20 years until those girls become Connecticut divorcees with secret drinking problems and children in ashrams, and then you can run into them at reunions and sympathize.”

Although “If You Ask Me” is at least as much a work of fiction as of film criticism, it’s at its best when Libby comes out of her haze to deliver a sharp, novel opinion. Describing “Jungle Fever” from an unusual but apt perspective, she writes, “Spike’s movies always have drop-dead clothes and gorgeous furniture and jazzy camera angles, as if he just loves making movies; Spike is great because he’s like an activist Vincente Minnelli.” Annoyed by “Edward Scissorhands,” she notes: “Some people say that this film is an allegory about Jesus or the role of the artist in society. Jesus, if you ask me, actually had something on his mind besides hedge clipping, and I don’t remember anyone chasing Picasso, or Warhol or even Tim Burton, who conceived and directed this movie, back up to his castle.”

Libby zeroes in on sanctimoniousness wherever she finds it. (On “The Fisher King”: “Almost all you need to know about it is that Robin Williams plays a homeless person who imagines himself to be a knight on a mythical quest. This is a film for people who thought that ‘Field of Dreams’ and ‘Dances With Wolves’ were too sarcastic.”

She also shows off a screenwriter’s way with one-liners. So Demi Moore “may in fact be the first actress to use movies as a steppingstone to modeling.” Libby’s cousin Andrew, an art director who’s “so incredibly creative that, as my mother says, no one’s holding their breath for grandchildren,” opines that “David Mamet is the Hulk Hogan of the American theater and that his word processor should be tested for steroids.” On the brat pack: “I’m very sorry, I know I’m not supposed to call them the Brat Pack, because it degrades their work in teen-vampire movies.”

Finally, the author’s most satisfying witticism is Libby herself. Her character is drawn with such glee and affection that at moments like one when “the usher had to conk me with his flashlight to make me stop whimpering” during “The Last of the Mohicans,” she can sound real, sweetly incorrigible and even touching. When Libby imagines Daniel Day-Lewis saying “Libby, let me take you in my arms and explain who the Hurons are,” the reader may even hope, for Libby’s sake, that her daydreams come true.

I know, I can’t believe it either, but I’m back! For many years, in the pages of Premiere magazine, I ruled as the planet’s most beloved and irresponsible film critic, along with pursuing my high-powered career as an assistant buyer in juniors activewear, and my role as a loving wife to Dr. Josh Waxner, a gifted orthodontist, and as the multitasking mom of two perfect children, my daughter Jeni4 (her spelling, don’t ask) and my son Mitchell Sean. I stopped writing my column, not just because Premiere went under but due to a crippling personal depression caused by Jennifer Aniston’s inability to hold a man. Jennifer is so beautiful and talented, but her spray tan became like a terror-alert thermometer, growing richer and more burnished as each no-good celebrity boyfriend hit the road. But now, thank God, Jennifer is happy and in love and wrapping those featherweight scarves many times around her neck, and so the time is right for me to once again bring joy and insight into the lives of my bereft fans, and to prove what anyone who’s ever gone online already knows: that I is the most important word in any language, followed closely by me, mine, oeuvre, vision, Goobers, and the question ”Why would I go see a movie called Melancholia when Immortals features Henry Cavill in a leather diaper?”

While I was away, I longed to discuss so many works of cinematic artistry, and to ponder, Why do all of the tribal characters in Avatar look like poured-resin figurines from a hospital gift shop? And in Black Swan, did Natalie Portman starve, cut herself, and experiment with lesbian sex because ballerinas almost never get to go to college? And how can I properly thank Natalie for fulfilling all of my most intimate fantasies by accepting her Academy Award while radiantly pregnant in a designer gown, accompanied by her dreamy French dancer boyfriend, who now appears in cologne ads? My only worry regarding Natalie is that she hasn’t followed my example and become Natalie Portman-Millepied. Because as every true feminist knows, hyphenating your name is a way of telling the world ”I’m no one’s chattel but I still landed a guy.” Jeni4 and I have, in fact, spent hours at the Occupy Wall Street demonstrations holding placards that read ”The 1% Should Marry the 99%,” with arrows pointing to Jeni4.

Right now there’s so much to kvell about, including the fact that, like every female on earth, I’m on my fifth viewing of Breaking Dawn. Because when Robert Pattinson and Kristen Stewart gaze at each other, their passion is so intense that it’s like they’re trying to pass kidney stones through their foreheads. Robert and Kristen understand that when a morose human marries a gloomy vampire, it’s a very big deal, which is why Kristen wears what seems to be a white spandex wedding gown; if she added a too-tight ponytail and cheekbone glitter, she’d look like a fiercely determined Ukrainian gymnast. Robert and Kristen honeymoon at an oceanfront estate with the sort of plantation shutters and gauzy canopy bed that announce ”We can only have volcanic yet tender interspecies sex inside a Restoration Hardware catalog.”

Everything in the Twilight films is always gorgeous and slow and agonizing, and when Kristen has a baby she’s shot in such tight close-up that she appears to be giving birth with her overbite. Personally, I worship Kristen’s overbite, because I can always sense the presence of a special assistant, just off camera, who’s been hired to smile encouragingly at Kristen and to gently murmur the phrase ”Close your mouth.” Robert is beyond squeal-worthy, even if the makeup people have never really nailed the vampire paleface thing, so Kristen seems to be marrying into a clan of greasy mimes. And of course I adore Taylor Lautner as Jacob the hunky werewolf, because when he learns that Kristen’s pregnant, it takes him a long moment of deep thinking before he turns to Robert and yelps, ”You did this!” And as a special bonus, there’s even a new character named Renesmee, because what girl doesn’t yearn to sound like a new prescription drug for acid reflux?

I am so thrilled to be back, and we haven’t even begun to talk about J. Edgar, that amazing movie where the hairpieces and the prosthetic aging makeup are so extreme that everyone, even the female characters, seems to be played by Gene Hackman. The script for J. Edgar is smart and sly, but the director, Clint Eastwood, has never been known for having a light touch, so it’s a little like watching Mommie Dearest directed by your dad. And of course the best thing about seeing any movie at this time of year is getting to enjoy the 28 trailers for all the holiday blockbusters, and not just the ones where multiple SUVs explode, sending Tom Cruise hurtling into your lap, but especially the one for that tearjerker about the woman who, after an accident, develops amnesia and can’t remember marrying her husband. Just like getting turned into a vampire by a bloodsucker with great hair, that sort of amnesia has a real romantic upside, if you ask me. 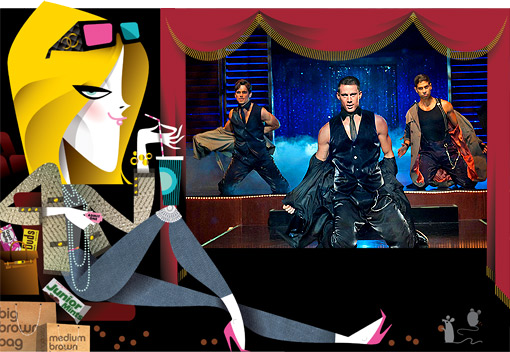 Paul Rudnick is rumored to be quite close to Premiere magazine’s film critic Libby Gelman-Waxner, whose collected columns were published by St. Martins under the title IF YOU ASK ME. Ms. Gelman-Waxner has also reviewed in the pages of Entertainment Weekly.